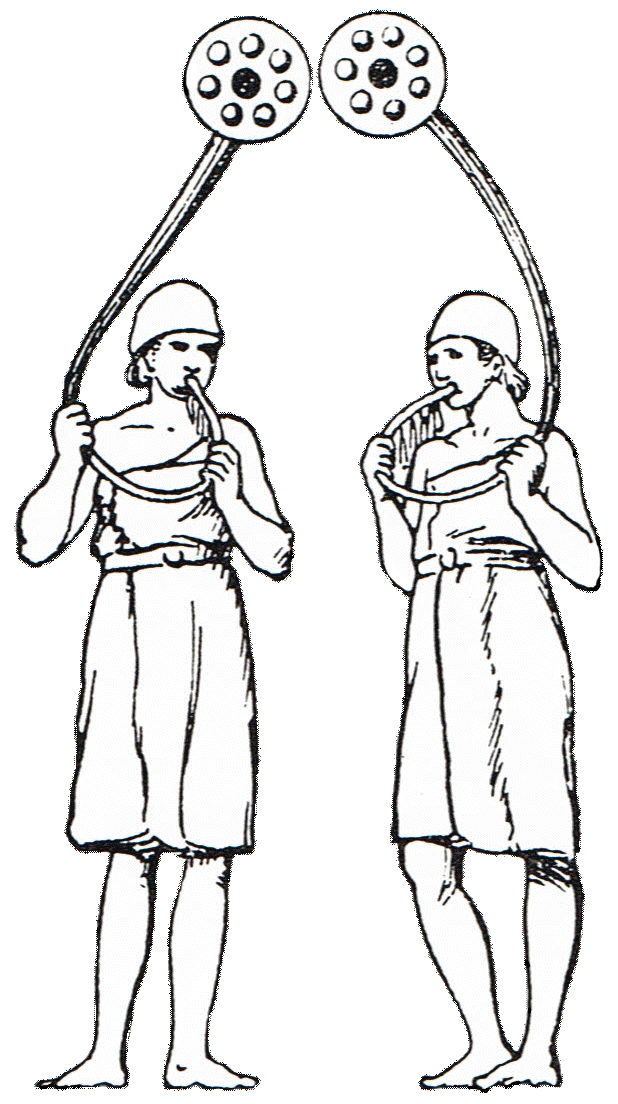 A Night in the Museum – just me and the Lurs

In June 1975, we set off for our Scandinavian/Baltic tour, my wife and I and two sons. The Copenhagen leg of the tour saw me sitting in a side room off the main gallery in the National Musem, with a section of bronze lurs. I could handle them, measure them, etc but blowing – not on your life.  Strictly verboten! The deal with my family was that I met the three of them at 5.00, when the museum closed, down at the Museum entrance. The lurs are such fascinating beasts that, by the time I looked at my watch, I was a touch surprised to see that it was already 5.30. I rushed out into the main gallery to find it deserted. At the end of the gallery was a huge door, something like a massive security vault door – the gallery did house a large collection of Iron-Age gold, after all. This was the mid 1970s and there were no mobile phones and I could see no way of getting in touch with anyone.

Fortunately, one of the windows did open and in the far distance, I could see people so I stuck out my head and yelled but could raise no interest. After that, I really had no choice, honestly. After all, one of the functions of the bronze lurs may have been to raise the alarm and here I was locked in a museum with a few lurs. I stuck the first instrument out the window and blew. It sounded easily, nice tone, clear notes and, oh yes, no-one took any notice. I had, therefore to repeat the process with all the five bronze lurs at my disposal, just in case one worked better than the others. At the time, I was a regular trumpet player and was more than able to keep up the performance for over an hour before the doors to the gallery were flung open and armed police swept in, along with museum security.

After a somewhat tense set of communications, it was agreed that we wait until the curator of the gallery appeared and, when she did, shortly after a couple of army guys bowled in, she was able to explain – in Danish – what had happened.

It was gone 7.30 by the time I got out of the museum to find a dear lady who was none too pleased at having to wait for two hours with a tired eight year old and his six year-old brother, who she had dragged around a steamy-hot Copenhagen for eight hours. Negotiations followed.

I arrived back in the museum bright and early the next day, to be treated like an honoured guest and was happy to report that it had been necessary to blow all the available lurs. No complaints. I worked there successfully for the rest of the week. They disinfected their lurs. I got to blow the bronze lurs. Under strange circumstances but, who cares?